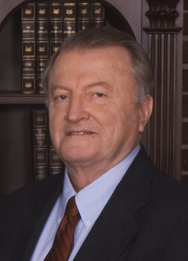 American Board of Trial Advocates

Joe Weninger was born in Strassburg, Ukraine, Russia, in 1942. Joe's family was displaced by the events of World War II, but by 1951 he and his family made their way to the United States. They settled in California in 1952. Education and hard work were important as he grew up.

While attending American River College in 1962, Mr. Weninger joined the Southern Pacific Railroad as a switchman. Working at night and going to school during the day, his railroad career continued while he earned his degree at California State University at Sacramento in 1966. He then attended McGeorge School of Law from 1969 to 1973.

While life as a railroader gave Joe important insight into how railroad companies worked, an on-the-job injury in 1973 demonstrated just how poorly railroad employees were treated when injured. It was at this time that Mr. Weninger retained the services of Dick Crow, the founder of our firm, who demonstrated the importance of legal counsel in ensuring fair treatment from the railroad.

Upon graduation from McGeorge School of Law in 1973, Joe joined The Crow Law Offices and has been an active participant in the battle for equity for injured rail workers. Joe is a member of the Sacramento County Bar Association, Consumer Attorneys of California, American Board of Trial Advocates and Academy of Rail Labor Attorneys. Joe has been designated as legal counsel by the Brotherhood of Locomotive Engineers.