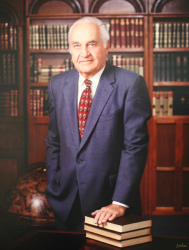 Richard “Dick” Crow earned a Bachelor of Arts degree in 1939 from Miami University of Ohio. While attending law school at Ohio State University, he pursued a career opportunity with the Federal Bureau of Investigation during World War II. His time with the FBI included undercover work in Bolivia tracking enemy agents during the war.

Upon returning to the United States he was stationed in San Francisco where he finished his legal education at the University of San Francisco Law School in 1946. In 1954 he moved to Sacramento and was a founding partner in the law firm of Wells, McCarthy and Crow. It was this firm that was the foundation for the current day Crow Law Offices. He served as President of the Sacramento County Bar Association and Sacramento Valley Chapter of the American Board of Trial Advocates (ABOTA). He was also inducted as a fellow into the American College of Trial Lawyers and was one of the founders of the Capitol City Trial Lawyers Association. He retired from the practice of law in 1997.