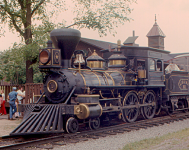 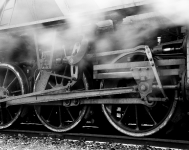 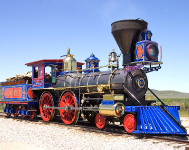 The earliest railroads can be traced back to European mines in the mid 1500s. At that time, horse-drawn wagons with wooden wheels were used to move ore along wooden tracks. It wasn't until the 18th century that cast-iron wheels and rails improved this system.

The first successful steam engine was demonstrated in Wales in 1804 and in 1825, the Stockton and Darlington Railway, near Newcastle, England became the first carrier to use steam locomotives.

It was about the same time that the first United States railroad company was begun. In 1827, the merchants of Baltimore, Maryland chartered the Baltimore & Ohio Railroad which opened in 1830. In 1829, the Delaware & Hudson Canal and Railroad Company utilized a British-built steam locomotive but found it too heavy for U.S. tracks.

The first regular passenger service steam engine built and operated in the U.S. was the Best Friend of Charleston, operated by the South Carolina Railroad in 1830.

Railroads spread rapidly in the eastern and southern states in the early 1877s. By the 1850s, track linked the Atlantic seaboard to the Midwest. In 1869, the east and west coast were connected by the first transcontinental route.

There was no more important decade of rail growth than the period of 1850 to 1860. During this time period, total mileage grew to 30,000 miles forming the beginning of a major national rail network. Most of the growth was due to the expansion of existing lines and U.S. government grants-in-aid of vacant lands to railroads to assist in western expansion. In 1870, approximately 8% of the total railroad mileage was built from these government grants. In exchange for over 131 million acres of public land granted to the railroads, the government received reduced transportation rates.

The Civil War to World War I "The Golden Age"

The Civil War period beginning in 1861 marked the first important role the railroads would assume in U.S. history. While both sides used railroads to move troops and supplies, the more developed northern systems proved an advantage to the less developed southern routes.

From 1870 to 1916, total track miles grew from 53,000 miles to 245,000 miles, an average of over 11 miles per day. During this time, technological improvements such as standard track, more powerful locomotives, air brakes and larger cars brought uniformity to the industry.

Beyond World War I

Technological change was not limited to the railroads. From 1920 to 1941, an expanding network of paved roads, development of the automobile, and the depression shrank demand for the railroads. While World War II increased rail traffic, profits continued a downward slide. The age of decreasing rail miles had begun as total railroad miles contracted 7.6% from 1920 to 1950.

Following World War II, total railroad miles continued to decline. From 1950 to 1992 total miles decreased 39.2% to 136,000 miles. During this time period, the railroad industry needed and received help from the government. In 1971, the federally subsidized Amtrak was born as a way to help relieve railroads of passenger service deficits. With federal assistance, Consolidated Rail was established in 1976 to renovate portions of six bankrupt railroads in the Northeast. In 1980, The Staggers Rail Act was enacted to reduce the Interstate Commerce Commission's jurisdiction over railroads. This reduction of regulations led to a more competitive marketplace and eventually to mergers and consolidations.

The one sure thing about railroads is that they are constantly changing. While most American railroads today are primarily high-volume freight haulers, on-going mergers and consolidations have reduced the number of Class I systems in existence.

Will this trend continue? Absolutely

The Railroads before the F.E.L.A.

The American rail system was built on a foundation of hardworking people in the 1877s. From a total of 23 miles of track in 1830, the U.S. rail network grew to 240,293 miles by 1910. During this period, railroads were the largest employers in the United States and the work was extremely dangerous. Equipment was primitive and many people gave their lives or were seriously injured in the name of forward progress and profitability.

In the late 1877s, building railroad fortunes was paramount with little effort paid to the safety of the employees. At that time, the life expectancy of a switchman was only seven years and a brakeman stood only a 20% chance of dying from natural causes. In issues of safety, the law favored railroad companies, not railroad employees.

Arising out of efforts underway by several states and at the federal level to enact legislation that would increase employer liability and limit the common-law defenses used against railroad employees, the Federal Employers' Liability Act or F.E.L.A. was enacted in 1908.

Before enactment of the F.E.L.A., railroad employees were subject to standard American form of justice based upon the English common law. At the time there were several common law defenses used successfully by the railroad companies against injured employees. These defenses, which severely limited opportunities for injured employees or their survivors to recover damages, also did little to promote railroad interest in employee safety. The common law defenses were as follows:

The railroads applied these common law defenses very successfully. Many workers who suffered disabling injuries, or the survivors of fatally injured employees, were left to rely upon family resources or welfare to survive.

The United States Congress enacted the first Federal Employers' Liability Act in 1906 in an effort to reduce the appalling accident rate in the industry and promote uniformity in railroad equipment and practices. That law, however, was almost immediately held to be unconstitutional because it applied to carriers engaged in intrastate commerce, which Congress had no power to regulate. President Theodore Roosevelt urged re-enactment of the F.E.L.A. in 1907, saying:

"The practice of putting the entire burden of loss...upon the victim...is a form of social injustice in which the United States stands in an unenviable position."

Congress passed the second F.E.L.A. in 1908, which the U.S. Supreme Court declared to be constitutional. A series of amendments followed, most recently in 1939, to form the F.E.L.A. as it now stands.

Congress also passed a series of acts, beginning in 1893, including the Safety Appliance Act and the Boiler Inspection Act. The intended purposes of these acts included the provision of uniform safety appliances and railroad compliance by setting forth penalties for violations and by imposing absolute liability for injuries resulting from equipment defects.